April was kicked off with the Taunton Half Marathon, the Exe to Axe and the Dawlish Aquathlon on 2nd April. Serane Stone continued her excellent form finishing first lady in the Taunton Half Marathon in 1.20.20, which is only 11 seconds outside the PB Serane recently set in the Bath Half. Richard Potter and Mark Hussell joined Serane in Taunton finishing in 1.29.33 and 1.44.58 respectively.

We had two men’s and one women’s teams entered in the South West Inter Club Relays on 8th April at Exeter Racecourse. These also marked the first of the relays this summer. Unfortunately there was a nasty accident on the M5, which meant that most of Exeter was gridlock and a lot of the athletes couldn’t make it the racecourse in time for the start. Luckily our ladies were willing to run two legs each and we had just enough men arrive to complete a team. We must say thank you to Helen Kirby for organising the teams for these. Fingers crossed we have a bit more luck in getting to the next relays on 19th May.
Women’s Team
Chloe Felton 12.29
Caroline Hewitt 13.25
Chloe Felton 13.21
Caroline Hewitt 13.24

On the 9th April we had two Harriers take on the Honiton Hippo. The Honiton Hippo is described as a tough multi terrain race with roughly 7 miles of mud, sweat and tears. The two brave souls to take this one were Richard Kemp and Luke Holway. Richard Kemp finished in 1.09.09, a 33 second improvement on last years race. Richard was closely followed by Luke Holway, who shaved nearly 11 minutes off his 2016 time finishing in 1.09.48.

Tamsin Phelvin had spent the winter training hard and getting the miles in for the Paris Marathon. The day came and it was probably one of the hottest days of the year, with temperatures hitting 26 degrees – not ideal for running a marathon. The weather didn’t stop Tamsin and she stormed round the streets of Paris in a time of 4.18, only a matter of seconds slower than her debut, over the distance, in London in 2016.

The Easter weekend was kicked off on Good Friday with the Fast Friday 10k. This is a fast, flat, 2 lap course around the quay in Exeter. Ben Stone finished in 40.32, Alan Ledger in 43.01 and Hannah Brown made the most of her recent warm weather training and got a PB of 50.07 – think a sub 50 will be on the cards soon.

On Sunday 16th April James Morrison and Theresa Butchers travelled to Bodmin for the Five Tors race. This is 8.3 miles with 1,077ft ascent across Bodmin moor. James finished 67th overall out of 267 runners in a time of 1.14.53. Theresa Butchers also had a cracking run finishing first in har age group (F65) in a time of 1.41.38.

The Easter weekend of racing was bought to a close on Easter Monday with the Easter Bunny 10k in Yeovilton. This is another fast, flat, 2 lap course near the RNAS Yeovilton. Serane Stone finished first in her age group (F35) in 37.01 and Jeff Curd had a brilliant run finishing in 45.52.

Martin Brace was the only Harrier flying the flag in the London marathon. Martin had a gutsy run finishing in 3.16.40 and raised lots of money for The British Heart Foundation along the way – well done Martin.

As always, we had an excellent turnout in the local parkruns, especially at Killerton. Not only was there a fabulous turnout, I think PB’s were contagious! Luke Holway and Ruth Hyland managed to get not one, but two PB’s each this month. Luke Holway improved to 20.54 and Ruth improved to 23.27. Other Harriers who bagged a Parkrun PB in April were Len O’Connell (21.59), Richard Kemp (21.38) and Hannah Brown (24.03) at the Longmeadow Parkrun in Taunton. Well done to Simon White (finished 2nd in 22nd April Parkrun), Tim Felton, Mary Humphries, Ben Stone, Chloe Felton and Theresa Butchers who had excellent runs at, at least, one Parkrun in April.

To round off the month we had a fabulous turnout for the off road group run around Knightshayes. This is proving popular so will become a regular feature on the last Thursday of every month. The next one is planned for 25th May meeting at Pensylvania car park at 6.30 to run around Stoke Woods. Keep an eye on the facebook page for more information about these.

Once again another busy month for racing with some brilliant performances and lots of PB’s. No doubt May will be another busy month, especially with our club organised race, the Bampton to Tiverton. Entries are still open via the paper form to Walter or online. Entries can also be taken on the day. As usual, it will be great to get a strong Harriers presence and if you can’t run then your help would be more than welcome in the organisation. 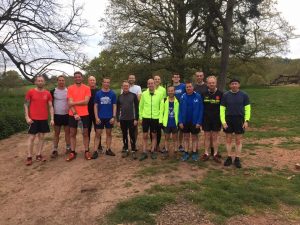 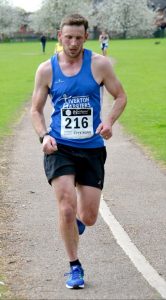 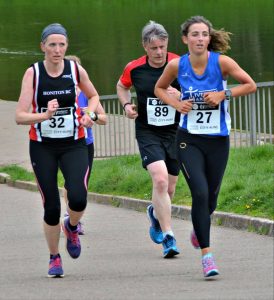 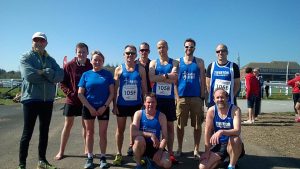 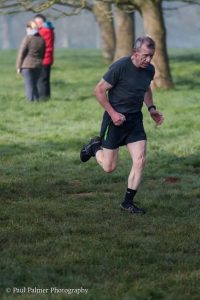 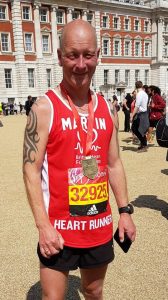 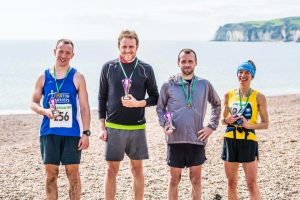 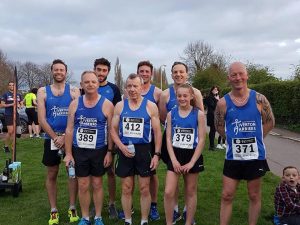 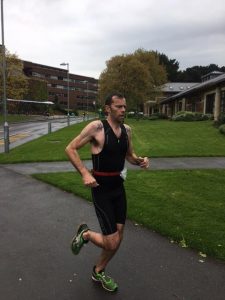 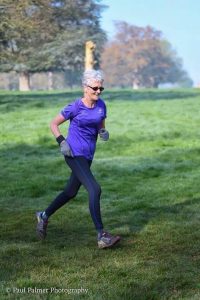 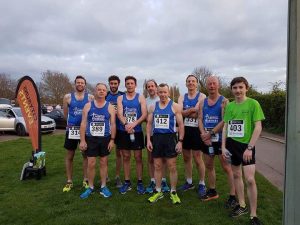 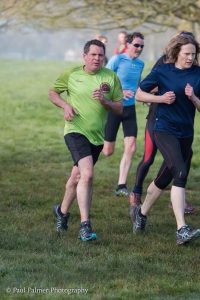